Best places to visit in Brazil

Brazil, with its Carnival, its luxuriant jungle, its hot sand beaches... The quintessential dream country. The welcoming accent of its beautiful mixed-race women, its tropical climate and the colours of its cocktails all conspire to make you leave your troubles behind. Though Brazil is a well-developed country, it has preserved all of its festive and musical culture.

It is a vast country; it would be best to focus on Amazonia and the North-East or even the big cities and beaches of the South, if you don't want to end up spending your holidays on a plane. Lucky for you, we have the solution: Evaneos Travel experts are here to share their great deals and secrets with you. Follow the guide!

A bubbling southern supercity, São Paulois the economic heart of the country. For rest and relaxation, it would be better to go to Rio de Janeiro, where a week will not suffice to enjoy sugarloaf, the Corcovado, Santa Teresa neighbourhood and the mythical beaches of Copacana and Ipanema. Similarly, Ilha Grande is chock-full of idyllic beaches where you can go diving.

Whereas the culture in other South American countries is Andean, Brazil distinguishes itself by being more Caribbean, and Portuguese is the spoken language. Still on the coast, Salvador is the ideal destination to fully enjoy the carnival atmopshere. It's a good compromise for those who desire greater authenticity without having to go as far Amazonia. Otherwise, set course for the North, around Belem, still on the coast; and to Manaus, in the heart of Amazonia. Here, you will rub shoulders with a different Brazil: more primitive, less Westernised.

Take advantage of your trip to Brazil to see the Foz do Iguaçu waterfalls or the wetlands of Pantanal, inland.

The simple mention of its name casts a spell over your imagination. Beautiful and...

A fishing village in Camamu Bay, Bahia state, where the possibility of enjoying...

The entry point to the amazing landscape of Lençois Maranhenses and one of Brazil's...

A village situated in central Bahia, and a quieter entry point than neighboring Lençois,...

Brazil's highest waterfall, located right in the middle of the Chapada Diamantina

There are superb views over the sea and the Mata Atlântica and of islands and beaches...

A natural border between Argentina and Brazil, the town of Iguaçu is home to famous,...

Island in the Tinharé archipelago in the south of Bahia state, and truly a little...

About the same size as Switzerland and nestled at the mouth of the Amazon, Marajo...

Ilha Grande is a popular holiday destination for Brazilians thanks to its calm, relaxing...

The principal town in Chapada de Diamantina, at 400km from the Bahia State coast.

The most well-known beach on Ilha Grande regularly appears on the list of the most...

A mountain that stands 1,100 meters high and the pride of Chapada Diamantina.

Any traveler interested in Brazlian culture and its architecture needs to visit the...

A journey back in timethis baroque jewel was, in 1981, the first of Brazil's towns...

The vast humid plain of the Mato Grosso, on the Bolivian border, houses an ecosystem...

On my trip to Brazil, I was lucky enough to stopover in Parat y , a green, verdant...

Situated less than half an hour away from Jericoacoara (12km), Préa is for sports...

When I was staying in Brazil, I fell in love with Salvador. Salvador de Bahia, or...

A trek in the Chapada Diamantina region, considered to be one the best hikes in the...

An absolutely essential place to see when visiting Brazil. A crazy, pulsating city...

Viewed from the sky, the built area of Belém - which extends out into the estuary...

Santa Teresa is the bohemian neighborhood of Rio de Janeiro, and one of the nicest.

Founded in 1719, Tiradentes is a little corner of Portugal lost in the middle of...

Florianopolis is a seaside resort in Brazil located on the Brazilian continent and...

300 kilometres from Fortaleza, accessible only by a road through the dunes, the beach...

An ecological paradise at the junction between the Pantanal wetlands and the Iguazu...

Búzios is Brazil's St.Tropez (with which it is twinned) and is a charming place. 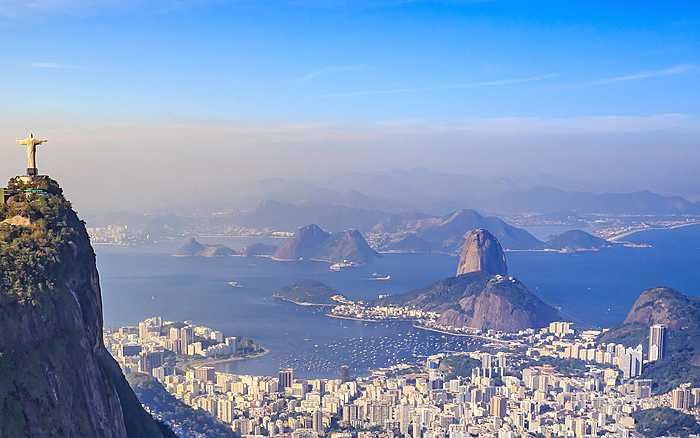 Design your trip to Brazil with a local travel agent

£1,390
Argentina
From the pacific to the Atlantic

£1,760
Brazil
Classic Tour - From the Amazon to Rio
Experience added!
You can add more experiences to your trip itinerary before sending it to a local agency
View my trip itinerary