Tvrđa, the citadel of Osijek

The fourth largest city in Croatia by population and the economic and cultural capital of Slavonia, Osijek is an important tourist destination in the country, despite the fact the city suffered damage when attacked by the Serbs in the 1990s. The first historical records of Osijek date from the Roman era, and the city still contains buildings and ruins from each of the main periods in Croatia's history.

A 'Tvrđa' for defensive purposes

When you visit the 'Tvrđa' ('citadel') in Osijek, which stands on the right-hand bank of the river Drava, not far from its confluence with the Danube and overlooking the surrounding marshes, you will understand why the site has such strategic and defensive importance. The site was originally occupied by the Romans, who built the town of Mursa on it. And later it was occupied by the Slavs as it kept them safe from the risk of flooding. Osijek was subsequently destroyed then rebuilt by the Ottomans in the 16th century before eventually being retaken by the Habsburgs.

It was during this era that the construction of the citadel began, the intention being to ensure the city would not be lost again! The Austro-Hungarians therefore chose to build this defensive bastion on the heights of Osijek and enclose the centre of the 18th century town within its thick walls. The succession of beautifully baroque-fronted buildings, squares and cobbled streets here form a highly attractive architectural ensemble, which is gradually being restored.

All the museums you could wish for and Gornji Grad, the high town

There are several museums within the citadel walls. It would take quite a while to visit them all, but you can always opt just for the Archaeological Museum, which houses a collection of antiquities dating from the Roman era through to that of the Celts. As for the Museum of Slavonia, this is a good place to visit if you want to learn about the region's history and heritage. There is also the Gloria Maris Museum to visit too, though its maritime theme can seem somewhat out of place. 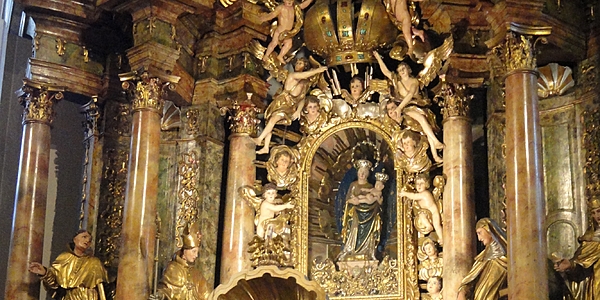 You must not leave Osijek without setting foot inside the Church of St Peter and St Paul. Neogothic in style, this red brick church was constructed at the end of the 19th century and has the second highest steeple in Croatia after that of Zagreb Cathedral. Its interior is especially impressive, with baroque alters, wall paintings, and Viennese-style stained-glass windows. It is bound to leave you impressed!