Travel on the waters of the Irrawaddy and its secrets

Herman Hesse's pen magnificently described the beauty of the waters of this river "the transparent green, the crystal lines of its wonderful design. He saw bright pearls rise from the depths, bubbles swimming on the mirror, sky-blue reflected in them." In this supreme work of literature, the German writer highlights the importance of loving water, learning from it, becoming capable of understanding the world, penetrating its mysteries. When you travel in Myanmar, lose yourself on the water of the Irrawaddy, in the middle of the tumultuous silence of nature, the water will perhaps start to reveal some of its secrets to you.

Having heard and read several things about the Irrawaddy River, I went to its waters to admire the view of a distant Yangon, a stranger to urban movements, this great blanket of water was surrounding me, blessing the land with fertility. This scene takes on a particularly significant value because this river has lived; it's a silent witness of Burmese history. So I decided to explore, to 'listen to the river' in the words of Hermann Hesse and I went to travel on board ferries, dugout canoes, motorboats and even in a kayak, inspired by the tale of the journalist's trip. I left in the hope of getting to the bottom of one of the mysterious threads that surround this famous river. Hoping that my findings will inspire you and encourage you to take new routes, to listen too to the subtle murmur of the Irrawaddy.

The rhythm of travelling on the water allows you to observe those invisible lines which mark the borders between regions, between ethnicities, between the rural and urban lifestyles. The waters of this river are easily explorable from south to north and vice versa, always surrounded by nature but never alone in it. If you want to undertake an adventure yourself you should first ask for a permit which can sometimes be difficult to obtain. You need to detail what you want to do there and why. Other ways are possible of course. You can go to a tourism agency and arrange a trip or simply go to the port and arrange with the owner of a boat to go travelling in the surroundings. The first 'secret' to be discovered: the country has not shaken off its political regime. Even when you have the impression that authority is not present around you, even when you only see tourists (or when you don't see any at all) and you have the feeling that everything's going well, the peaceful atmosphere of the water hides a rigid and strict, even dictatorial, daily reality.

Having taken the main water ways linking the more important cities together, listed as World Heritage sites by UNESCO, such as the cities of the old Pyu civilisation (coming from Tibet, established in the basins of the Irrawaddy before the Burmese Empire was at its peak), as well as the mythical cities of Mandalay and Bagan, I was able to make some sad observations. During these journeys, all the way down the river waves of rubbish came from all directions towards the boat, household waste was being burnt outside behind the houses if it hadn't been thrown to a corner forming a giant pile of rubbish. For the first time, I could see with my own eyes what environmental journalists are always talking about: the damaging of ecosystems, the start of the end for some animal species (like the Irrawaddy dolphin that I wasn't able to see but which made several very appreciated appearances a long time ago according to the villagers I talked to) and this confrontation with the reality of the consequences of increasing Western consumption which is decreasingly in line with the roots, traditions and cultures of Myanmar's people is one of the most brutally sad, but most revealing, visions that I discovered on my journey. 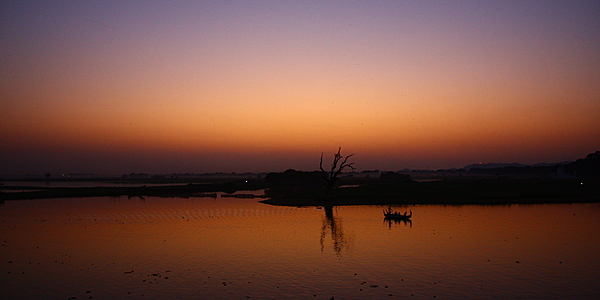 Finally one of the most striking realisations I had during my adventures on the Irrawaddy is that the country is in the process of changing, for good and for bad. It's changing and evolving just like the waters of the river I was travelling on. Myanmar is looking for its position and making its own place in the tourism market and the economic market. The inhabitants will have to follow, to undergo these changes and adapt to the new. They've already done this before, they survived the colonial period, the last 50 years of violence, of imprisonments, of injustices, and they are always waiting for the 'current' politics to reverse. By waiting, they're observing and also listening to the secrets of the mythical and magical river which has seen them grow old.

The Burmese people have learned to seize the wise words that come and go with the Irrawaddy, "but out of all secrets of the river, he today only saw one, this one touched his soul. He saw: this water ran and ran, incessantly it ran, and was nevertheless always there, was always at all times the same and yet new in every moment! "

Thus is the Irrawaddy, thus are the Burmese people.

©
Thinkstock
Be responsible when visiting Burma; do not feed the junta!
More articles