The art of eating in Myanmar

For Burmese people, the day starts early with a hearty breakfast. Lunch isn't very important. After that is an afternoon snack consisting of tea with condensed milk and naan or other snacks. The day ends with dinner where all members of the family gather around a low table where all the dishes are served at the same time.

Due to its geographical location, Myanmar has fertile soil, water and many hands to cultivate fruit and vegetables, which are then prepared in multiple ways before putting them on the table. As a result of its cultural diversity (migration of neighbouring countries and numerous ethnic groups and tribes that you could come across during treks) the Burmese cuisine is sometimes remarkably diverse. You can be sure that Burmese people have creative spirits and can turn the most classic or strange ingredients into something that you'll enjoy.

Upon arriving in Yangon for the first time, I only had to leave my hotel and walk for a few minutes on the pavement opposite to find a completely different world to what I had faced during the previous 4 months in south-east Asia. Often left out at the expense of its neighbours, I thought the Myanmar cuisine was extraordinary. Packed out tea rooms, people cooking pilaf rice in large saucepans, women in front of temples selling cinnamon and banana rice cakes, etc. and my firm-favourite was waiting for me at the end of the road. After sitting down on one of the small pink plastic stools, a lady served me crushed tamarind soup, the rice came quickly after, accompanied with all sorts of delicious sides, with vegetables cooked in a way that I would never have imagined. The dessert was homemade coffee or tamarind sweets, with real sugar, being in one of the countries where the food industry hasn't yet taken over the entirety of food production.

I found the best meals by avoiding the hotels and tourist areas and following the locals, going to markets and letting myself be guided by my spirit looking for new flavours.

I strongly advise you, at least once or twice during your trip to Burma, to mix up your eating habits and ask your hotel where you can find a traditional Myanmar breakfast (they can often prepare it for you at the hotel). Being one of the most important meals for Burmese people, it is therefore one of the most varied and richest meals.

- Mohinga : The most popular dish in Myanmar and perhaps the least appetising… Made with noodles in a broth of fermented fish paste, the Mohinga has a particularly strong taste, you must try it at all costs but is hard to enjoy.

- Curry : the Burmese curry is incredible when you compare it with its neighbours. For 1,500 Kyats (around £1), you will be served a chicken or lamb curry, cold and very greasy, in a small bowl. Rice will quickly accompany it, then a soup/broth, with fish sauce, chutneys (fruit based sweet and sour sauces), onions in a sauce with beans, tomato and cucumber salads, and other surprises await you depending on the area where you will eat this essential dish of Myanmar. Don't forget that, apart from meat, you can ask for a second helping of all the dishes served on your table. 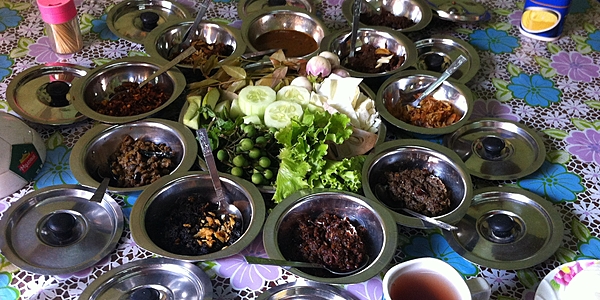 - Tea leaves salad: as Burma is a tea producer, you will find them in all the markets, to infuse them in a snack or a salad. This last option is the most surprising and is worth a try!

- Noodle salad: less extravagant than the other dishes, noodle salads were a safe dish for me, I could always order one when I didn't want any unpleasant surprises.

- Cuisine of the Shan State: the different ethnic groups of Myanmar all have their own cuisines. You will be able to discover numerous dishes during your travels in Myanmar. One of the most famous cuisines is that of the Shan State and particularly its noodles, which are lighter and softer than then classic Burmese noodles.

- Desserts: it is not common to order a dessert to end a Burmese meal. However, you will regularly find women on the street selling semolina, banana, sweet potato, and coconut cakes, scattered with sesame seeds. Something to give you energy when you feel peckish roadside!

Travelling is among other things changing habites, adopting other ones. One of my favourite rituals in Myanmar was to sit in a "tearoom" on a pavement to drink a red tea with a large amount of sweetened condensed milk, giving it a pinkish colour. Pastries, of the same nationality as the owner of the place (Indian, Thai, Chinese, etc.), come with your drink. A well-deserved lunch break during a day of sight-seeing!

Apart from the fact that you should get used to a service from a young age (who to leave a tip to means more than you could imagine) you will have a great time at Burmese tables, notably when you realise that it's completely normal to eat with your hands. Myanmar has numerous exotic facets and food is one of them.

©
Thinkstock
Be responsible when visiting Burma; do not feed the junta!
More articles