The Tatacoa Desert, which is actually a dried out tropical forest, lies a few tens of kilometres from the city of Nieva, in the Colombian department of Huila.

My suggestion:
If you have an interest in stargazing, I recommend a tour of the astronomical observatory located at the tourist part of the site, especially if you visit at the end of June/beginning July when the Star Party takes place there.
Summary:

The Tatacoa Desert isn't quite what you might expect; you won't see any expanses of sand here, and with good reason: it's actually a dried out tropical forest. Visiting and seeing the Tatacoa Desert and finding out how it evolved is very interesting. When you first set eyes on this area, you're immediately struck by the extensive amount of erosion and all the intermingling canyons and gullies that have been created in the clay surface. The water of the rainy seasons and the wind have slowly sculpted the earth here and shaped this landscape. However, the numerous several-million-year-old fossils that have been found (molluscs, rodents, giant sloths, etc.) are proof that a diverse range of flora and fauna once existed here.

A day is enough to fully enjoy what the Tatacoa Desert has to offer, and hiking enthusiasts will particularly enjoy this place. I recommend either spending the night in the desert (hammocks are available for hire) or staying in Villavieja, which is the closest village to the site. This way you'll get the chance to make the most of the fact that the sky stays extremely clear almost all year round. The Tatacoa Desert also happens to be famous for having very little noise and light pollution.

There are jeeps to take you from Neiva to Villavieja and across the strange, exotic landscape of this arid zone, which is a more pleasant place to explore in the "coolness" of the morning.

The Tatacoa Desert is located in the northern part of Huila Province, around ten kilometres from Villavieja.

My suggestion:
Don't forget to take sun cream and bottles of water with you. The sun beats down hard in the desert and there's very little shade available. A quick tip: get up at dawn to take advantage of the early morning coolness and have a better chance of spotting wild animals.
Summary:

The Tatacoa Desert is not exactly easy to get to. Once you arrive in Neiva, you still have another ten kilometres or so to go before you reach the little town of Villavieja: the gateway to the Colombian desert. There are two options open to you: jeep or mototaxi (a motorbike-based taxi).

The Tatacoa Desert is actually a dried out tropical forest that has slowly been converted into an area of canyons and lunar-like valleys over time due to the effect of the climate. The desert takes its name from a type of rattlesnake that used to inhabit the area. The Tatacoa Desert is – it has to be said – crawling with snakes and scorpions. But no need to panic: these little creatures are generally shy and tend to avoid people; in fact it's true to say they're probably more afraid of you than you are of them.

The Tatacoa Desert has something of the pseudo Grand Canyon about it, with its ochre-coloured rock surfaces, cacti and hot, dry air. However, the similarity ends there because this rocky expanse is actually unlike anything else I saw in Colombia before I came here. Tatacoa is made up of two deserts. The red-coloured part, Cuzco, consists of a tangle of ochre-coloured labyrinths and canyons, whilst the grey part, Los Hoyos, is made up of grey anthracite rock walls and surfaces: it's actually this part of the desert where it's possible to observe large numbers of colourfully plumed birds. It should be pointed out though that they're easier to spot in Los Hoyos because their bright plumage stands out against the grey rock.

Something interesting to note is that an astronomical observatory has been built in this desert. This is because the relatively clear, unpolluted sky above it makes it a good place for star gazing. Don't forget to sample the taste of cactus before you leave the region! 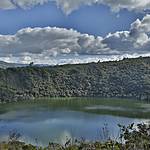