Boudhanath: a procession around the largest stupa in Nepal

After the devastating earthquakes that shook Nepal in April and May 2015 the country is slowly getting back on its feet. This article was written before these catastrophic events occurred.

The moment you get out of your taxi, the atmosphere will hit you. Even before you enter the sanctuary, the buzz of the city will seem far away and the pace of life will feel slower. Welcome to Boudhanath !

Boudhanath, the biggest stupa in Nepal

From the moment you step into the sanctuary, you'll immediately feel the spiritual energy that emanates from the place. With a circumference of 100 metres, this is Nepal's biggest stupa and commands respect. Under the watchful eyes of the Buddhas painted on each side of the monument, you'll feel very small indeed. Prayer flags, fluttering in the wind, are all bursts of color that contrast with the whiteness of the stupa. From the bottom, which represents the earth, you can look up towards the arrow, which tops the 13 levels which represent the stages that need to be passed in order reach nirvana.

From there, you'll see a meringue-shaped dome that symbolizes water, followed by the sparkly arrow that represents fire and reaches for the heavens. The parasol that caps the arrow symbolises air and the stupa's crowning pinnacle represents the celestial sphere. It's an harmonious design and incredibly mesmerising. Maybe it's the feeling of being watched by Buddha's all-seeing eyes that makes it so spellbinding? Or maybe the soul of Buddha himself as, according to legend, one of his bones is buried in the monument?

The atmosphere of the place draws in the crowds. Located in the centre of a circular courtyard, the stupa is lined with shops and tearooms. The upstairs windows are a great place from which to observe the religious goings on below. Going to Boudhanath in the late afternoon is amazing ; pilgrims dance excitedly around the stupa, moving clockwise and turning prayer wheels so as to free their sacred mantras. It's a whirlwind of colours and perfumes - the monks' maroon robes, the pilgrims' black coats, red/yellow,/blue prayer flags, burning incense, the flickering of yak butter candles... You'll hear the Buddhist mantra 'om mani padme hum' being chanted by pilgrims, alongside the echo of music streaming out from the surrounding shops. A pulsating atmosphere that you'll never forget. It's a fascinating, hypnotic sight that will keep you glued for hours. 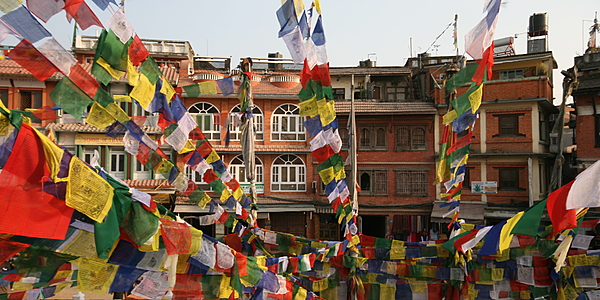 From Boudhanath to Namo Buddha: on the trail of Buddhist culture

To make the most of your time there, it's a good idea to stay in one of the hotels next to the stupa. In the evening, once the tourists have left, you can enjoy a walk along small lively streets, sample some momos, and watch painters practice their dextrous art.

In the morning, make sure you tour the surrounding monasteries, which give a great insight into Tibetan Buddhist culture and are filled with interesting objects. Attending ceremonies is an unforgettable experience and the monks will happily tell you about local history and the significance of their sacred rituals.

To delve further into Buddhist culture, continue on to Swayambhunath , a stupa on the heights of Kathmandu or head a little further east and explore the stunning Namo Buddha stupa, which offers incredible views of the Himalayas.