No point losing yourselves in the superlatifs, the city of Mexico is quite simply gigantesque. Despite if the is the custom of saying that a life can't suffice to discover all the treasures, make the most of your trip in Mexico to see the maximum. 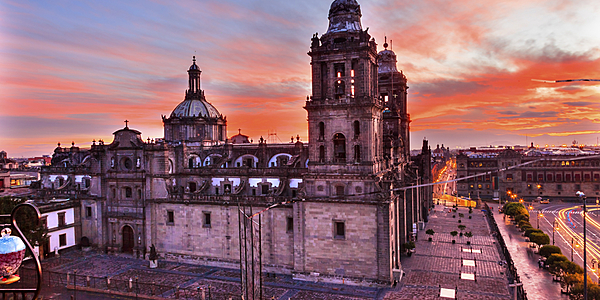 With its 20 million inhabitants, the city of Mexico is the most populated metropolis in the world. It disputes the title every year with its Japanese, Tokyo and Brazilian Sao Paulo competitors. To support such a big human concentration, Mexico casts striking dimensions. It extends across 60 kilometres from north to south and 40 kilometres from east to west. It's absolutely phenomenal.

Tentacular, enormous, gigantic, crazy, mental, devouring, striking, surprising, frightening as well, superb, rich or contrastingly poor... No one adjective can truly be enough to describe it. Whatever you can say will be far from the reality that this city holds, characterised by an incredible insanity but also by a dynamism and an energy without equal.

Located at 2240 metres of altitude and with 200 days of sun per year, Mexico is a city which has large problems with pollution. As well as numerous factories which are in part responsible for this permanent state, it must be added that Mexico has an incessant flow of hundreds of thousands of vehicles including 92,000 taxis. With the bus as well, the metro-bus and the metro you will always find a method of transport to survey this Dantean city. 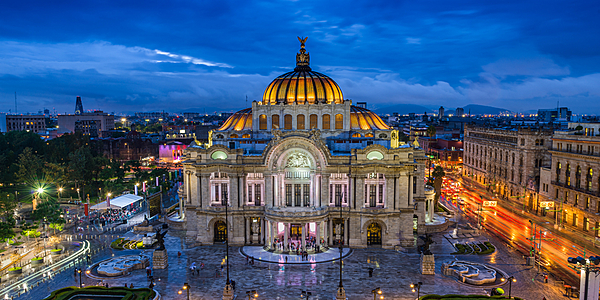 You will already know, to completely and entirely discover the city of Mexico is pretty impossible. Instead of setting out on an improbable quest, go to the essential to see the most beautiful. By going to the Zocalo you will find yourself in the third largest place in the world. In doing a tour by yourself, you will admire the marvels which surround for example the Palacio nacional, the Palacio de Gobierno, the Cathedral, the Monte de Piedad, the Templo Mayor. From there you can in a few walks discover superb churches, typical roads like those of la Moneda and la Madero. To catch your breath, take some breaks in the different places you come across on your walks. Amongst some, there are those of the Alhóndiga or the sublime Santo Domingo. The park of Alameda is also very relaxing. You can stay there for hours or simply watch life pass by and the hustle and bustle. To get a better impression of the immensity of the capital, pass before the Correo Mayor and the Palacio de Bellas Artes and climb the summit of the Torre Latino. From its 44th floor, you can see a breathtaking 360 degree view unto the horizon. On the Garibaldi place you can go to monuments of Mexican culture, the mariachis and the Mexican kitsch catch. Don't miss the basilicas of the Guadalupe. One of the two seems to incline dangerously. Mexico has 113 museums within its walls. It is a world record. Even if you moved in here, you couldn't visit them all. If there is one that is truly unique to see it is the museo nacional de Antopología. It will take a whole day to go around with so many marvels to admire.