The Myanmar territory welcomes over 135 ethnic groups all speaking different languages but having a language which unites them as a nation, Burmese. Depending on the State that you visit during your stay in Myanmar, you will find a vast scale of traditions and beliefs pertaining to each ethnic group. From my point of view, the Môn and Kayin States are very interesting for the beauty of the land but also for that of the tribes. These aforementioned are sensitive to State discrimination and are forced sometimes to speak the national language to the detriment of their own languages. The result: Kayin refugees in Thailand and in Môna that don't speak their language anymore. In the end, a process of "burmisation" is in motion. If you wish to meet these marvellous tribes and make your trip a richer experience, it will be necessary to include both States in your itinerary.

The Kayin State is surrounded in the north by the division between Mandalay and the Shan State, to the east by the Kayah State and Thailand and to the west by Mon State and the division of Bago. It's estimated that there are 2 million Kayins living in the Burmese lands, the figure rising to 5 million if we include those who live abroad as well as refugees in Thailand. This makes the Kayin population the second most important of the country, after the ethnic group of Shan. Of Mongolian origin, the Karen (an old name given to this tribe) would be installed in the Irrawaddy pool before the Môns, but there is no historic trace that is able to confirm this information.

Of Chinese origin, the Môn people are one of the oldest on the planet. Thanks to them, the tradition and writings and the Buddhist cult are set into the Burmese culture. The Môns have seen the power of their kingdom grow until the eighth century, gaining stability in the commercial and political zones maintaining a peaceful and stable atmosphere. Through centuries of constant fighting for their rights has preceded a grand empire which the Môn people once knew, going as far as armed conflicts to defend their lands and rights. Today, these lands host over 2 million inhabitants of which the origines are mainly Môn but also from Karen and Bamar. The State marked out its southern borders with the Tanintharyi division and the sea of Andaman, the Bago division to the south-west and to the East the Kayin State Unfortunately, despite the fact that the Môn State has been created, the Môn (like the other ethnic minorities) have never been respected. The Juntes years have only flouted their rights to individuality. 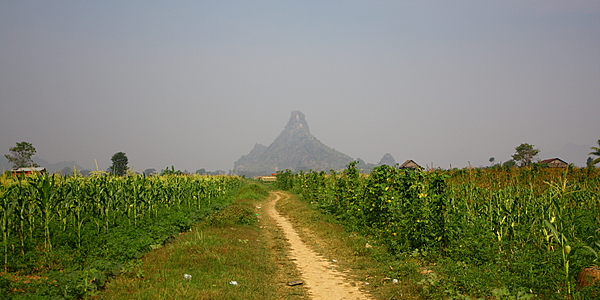 Each tribe has their own style and this is easily identifiable by the clothing outfit, very important in their eyes. The colours worn by the Môns are red and white meaning courage and purity. The Kayins have dress codes changing according to civil statutes: if women are married, they wear an outfit in 2 pieces with the arms covered and if the women are single they wear just clothing of one piece in clear colours, see-through white. But the style goes beyond what the eyes can see, it's also about notions of beauty, the respect for older people, the way in which they perceive life and death. It's also the way in which parties are organised (or forgetting birthdays which have no value in these societies) the way of sitting at the table, of preparing food or hunting. What defines the "style" of each tribe is its origin and its geographic placement (if the tribes are urban, rural or mountain dwellers.) This distinction is important due to the fact that the Skaw, the Pwo, the Bwe, the Karenni and the Pa-O live in the Kayin State, don't share the same traditions, which vary according to the place where the groups live, the manner in which obtain their needs and also their religious beliefs, even if most amongst them are Buddhists.

The reality of the Môns and the Kayins, like that of all minority people, is sometimes discouraging. The Ethnic groups don't know any other philosophy of life than that of work, work without rest, they aren't concerned by health matters nor security or retirement. They live day to day. The lack of work is actually due to a reality which strikes hard in both States, forcing the inhabitants to agricultural and transport work, all whilst paying their taxes to the state and for nothing but the State. The young go more and more into urban zones to study having to sometimes work very long days to be successful and to achieve their studies so as to be able to send money to their families.

Finally, these two ethnic groups like so many others in this country, face a standardisation phenomenon of the Burmese culture, that is to say, a government project wanting unite in an Burmese identity. In consequence, numerous Môns and Kayins groups have had to move into zones which are further away, close to mountains or migrating to refugee camps in Thailand. Nevertheless, there are researchers, teachers notably less engaged seeking to invigorate the use of customs and languages of each tribe. There are equally people of these tribes living in exile and staying true to their origins. Despite this pro-Burmese phenomenon, there is no rivalry between these two Burmese groups. This could be due to that representative identity quality of the two tribes which is the respect towards other ethnic groups, the respect of the Other.

I had the chance to meet young people with Kayin origins during my trip to Burma. After having a conversation with these youngsters, they said to me: "the Kayins are friendly, kind and very welcoming, he who becomes a friend with a Kayin has a friend for life". The distance of our different life styles hasn't stopped us from continuing to through social networks. Incidentally, recently, I asked for help from my Kayin knowledge for the collection of information so as to write an article for a linguistic review in Mexico. Their response being the following:"he who becomes friends with a Kayin, has a friend for life , of course we will help you". The Kayin identity that they described to me was up to the standard! The face of "Karen" that I had known in a book of tribes populating the face of the Earth, has significance for me in the end, this face was one of a proud and welcoming people, just like the Môns, both the tribes with two identities with values based on respect and friendship. Unfortunately today I couldn't lie to myself and all I did was to wonder "how long will these tribes be around for"? Are they going to dissolve in the standard mass of Burmese culture then in the world culture? Will we be able to recognise these young Môns or Kayins in the street in a few years time, or will they end up adopting the same "style"? Will we find youngsters proud of their origins or will they will have less and less desire to be different. For how long will these States are going to still keep their identities?