From Kalaw to Inle Lake

At 6 in the morning, the cold wakes me up before the other hikers and I go for a stroll. I see the village slowly waking up with the first rays of sunlight. A village woman prepares tea and gives me a place near the fire to warm me up. The zebus walk towards the fields, guided by their owners, the children eat their rice pudding for breakfast. I was only there for a night, to rest after walking for 35km before resuming the trek, I suddenly felt part of the village that was starting a new day at the same time as the sun, this village that I left behind me when I picked up my rucksack to continue along the route.

If you want to go for a trek, the path from Kalaw leading to Inle Lake is one of the country's most popular. When going to Kalaw, this pretty mountain village, you will find numerous tourism offices organising various type of tours, at different prices. Each office has a different policy, or at least they display it in this way. Some support sustainable development, environmental protection, support village families or only offer a three day route to explore the area. It's up to you to read between the lines of each tourism business and to choose the right one. What's certain is that each trekking office has its own route and that these routes are more contemplative and cultural than adventurous. In my opinion it's a great way to spend three days of your trip to Myanmar!

Your first steps on the route will lead you to the Kalaw plateau to gaze upon the town in the freshness of the morning. This part of the route is ideal to get to know the members of your team, if you have chosen to share the experience in a group. Throughout your trek, you will find zebus, birds and lizards in peaceful nature, inundated with cultivated fields with streams running through them. You will climb and descend by hills and narrow paths without having to make great efforts. The route requires you to be attentive to discreet changes to the landscape, passing from a green vegetation to reddish soils and stony landscapes, as well as to agricultural lands unfolding at each place.

Myanmar is a country which unites numerous ethnic groups (132) and you will come across several tribes during your trek and there's no doubt that these encounters are a high point of this trek.

You will meet the Danu tribe, of Burmese descent. The name of this tribe in the Danu language means "courageous archers". For almost 4 centuries this tribe has abandoned arches to take care of the land.

Of Mon-Khmer origin, it is one of the oldest tribes of Myanmar and its known for its resistance to the opium trade. This tribe distinguishes itself with its colourful dress code, a striped longyi (a traditional unisex dress), a blue jacket and rings around belts of married women. The oldest wear white and have a shaved head.

This tribe is the largest of the region, of Tibeto-Burman origin, living mainly in the leaves trade to make chewing betel. According to a legend, the Pa'o tribe descended from the union between an alchemist and a dragon. This love gave 2 eggs, one black and one white. The black egg fell into a river and floated as far as the Shan State and gave birth to the Pa'o Tribe. In honour of this black egg, they dress almost exclusively in black (leotards, long-sleeve cardigans, longyi and black socks), with an orange and red turban. The second egg, that stayed with the alchemist gave rise to the Ka-yin tribe. The traditions and languages of these tribes are very similar (they can understand each other). A charming legend about the origin of these two tribes of Tibetan and Mongolian past heritage. 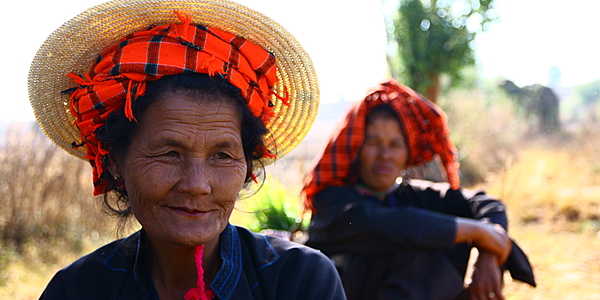 During your route you will find an unspoilt natural environment, scattered with plastic waste all along the path, resulting from rapid industrialisation. Not very surprising in a developing country. The families with whom you will spend the night will have no contact with you, you will stay with them without any real exchanges. That makes you think, how are these trekking tours organised? What compensation payment do these families receive from the organisers? Are there projects led by tourism businesses that aim to improve the everyday life of villagers, or is it just a business like any other?

For my part, my best memory of the trek was seeing a group of Pa'o women coming back from the market, sat on the grass. Thanks to our guide, of Pa'o origin herself, we were able to talk with them. One of the women explained that if we were speaking at the moment, despite the countries of origin being so distanced, it's because we knew each other in a past life. This woman had a limpid look and a genuine smile, they were happy to find someone on their route and be able to talk to them. I was also delighted by the opportunity of having these encounters. Looking back on the trip, I remember with joy being able to travel more than 60km on foot, surrounded by this natural environment and having met these pleasant tribes living sheltered from the western world, shielded from modern day vices... but for how much longer? Finally, more than the adrenaline, this trek made me ask questions regarding the way in which we travel and our lifestyle in the "modern" world.