One of the first things I noticed upon my arrival to Yangon was a conversation between two women, in front of the Moseah Yeshua synagogue. Under the gentle shade of a tree one of the women was preparing desserts to take away and the other was selling flowers. The first woman was wearing a veil covering her face and the second was wearing a tilak on her forehead. The town of Yangon made a strong first impression upon me, the image of ethnically diverse people living in harmony, an image that I haven't found in any other town in Myanmar.

Yangon has a large number of religious monuments of all kinds, leaving the field open for all spiritual occasions and practices. During your visit to Myanmar you will mainly visit Buddhist temples to appreciate their imposing architecture and cultural importance. There are numerous cults and rituals here, so here is a detailed guide enabling you to explore them.

There is no state religion in Myanmar but the country mainly practises Theravada Buddhism, which is the oldest form of Buddhism, practised since the Burmese Pagan Kingdom era. However, since the 70's the practice of Vipassana meditation started taking place and today there is a large number of "Vipassana" meditation centres in the town.

In any case, in Myanmar, the practice of Buddhism mixes with animistic beliefs such as "Nats", names given to spirits. A strong belief in astrology is always evident. Called "Mahabote", it is practised by all social classes. The astrological calendar splits the week into 8 days, Wednesday (Buddha's day of birth) being divided in two. In this calendar, each day is represented by an animal, as well as a planet and a cardinal position:

The Burmese customs have a direct link with astrology: the breakdown of days, predictions, names given to new-borns, etc. Your astrological sign (and therefore your personality) depends on the day of the week on which you were born. It is because of this practice that the majority of Burmese people don't have a surname, but a name linked to their astrological sign.

Believers go to the "Paya" (Pagoda), firstly taking off their shoes and also removing their socks if they have them, wearing respectful clothing (arms and legs covered). As tourists, if you wish to visit the Pagodas, don't go wearing shorts/tank tops, otherwise you won't be allowed in! Believers bow down in front of the figure of Buddha, then pray in silence or by singing, walk around the Pagoda, or sit down (feet in the opposite direction of Buddha - feet are the dirtiest part of the human body). In the majority of temples, the days of the week are represented by a sculpture of the animal attributed to it, together with a sculpture of Buddha. You will see, around the pagoda, from all 8 angles, a representation of one of the animals (garuda, lion, tiger, elephant with and without tusks, rat, guinea pig and naga). One of the most interesting practices to observe is the pouring of water over Buddha and on the animal linked to the believer's day of birth. In general, one pours the same number of glasses of water on the animal as your age ( i.e. I'm 25 years old, I was born on Wednesday evening, I pour 25 glasses of water on the statue of the elephant without tusks). Finally, you may see believers donating coins (often fleetingly giving the impression that Buddhism is a communal religion) or sometimes carrying a sculpture of Buddha, this moment being a big celebration for believers and their families. 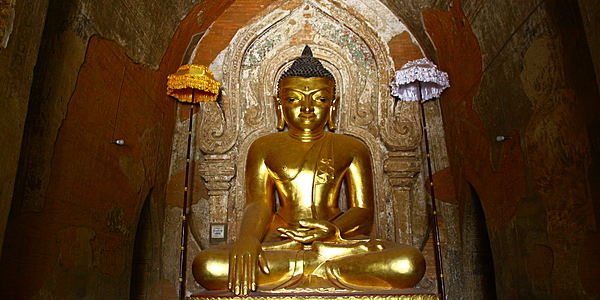 Depending on the time of day you go, you will find a completely different atmosphere. At dawn, when the air is still fresh, you will see Buddha sculptures being washed by barefoot monks to collect the alms. When you go at midday, when the sun is shining brightly, visitors will find a refuge from the heat in the Pagoda sheltering in the shade until it cools down a little. During the night, the Pagoda looks more festive. Believers go there with their mats and their lunch boxes, to share a meal around the pagoda, surrounded by other believers who come to pray.

Leave the town to go to a meditation centre, remain isolated from the hectic urban life, close your eyes and let the silence talk to you. Several centres open their doors to intrigued strangers, offering retreats lasting one week to 3 months, or even more, attracting people seeking an unusual trip! I tried the experience, taking a day course and I can say that it wasn't easy. Close your eyes, concentrate on your breathing and your perception of the outside world without formulating opinions. Meditation is a practice that all Burmese people are familiar with. The vast majority of men practised it when they were novices (trainee Buddhists) then when they became monks, if they returned to monastic life. Women have also been trained in this practice, even if the majority haven't gone on to spend a year in a temple. At school, with the aim of relaxing students so they concentrate better and to facilitate learning, certain classes start with an hour of meditation. Trying meditation is a bit like trying a local cuisine, a right of passage opening doors for you towards a much better understanding of Burmese culture.

I strongly recommend to everybody travelling to Myanmar and particularly travellers searching for spirituality to try this meditation experience.