A beautiful walk on the horizon

Always in search of the region's baobabs for my work, I've heard that some specimens of Adansonia suarezensis have taken refuge near an old fort called Windsor Castle.

Upon arrival in Diego Suarez, I got in touch with a guide to learn more and to be taken there. The guide explained to me that it's possible to hike to the top of the fort and see a view of the region. We set an appointment for the next day to discover this place that I hadn't yet visited, despite my many trips to Madagascar.

Windsor Castle is an old fort built by the French in 1900, on a 1300-foot high promontory, not far from Diego Suarez. You can imagine the work at the time, assembling all those stones in sweltering heat...

Enjoying an exceptional view of the region, they established an observation post from which they could see the enemy coming. It was all for naught, because during the invasion of Courrier Bay by the British in 1942, the telephone line was cut and the observation post was unable to warn anyone. There are times like that... 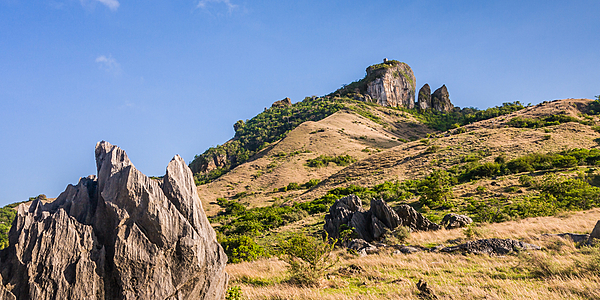 ©
Pierre-Yves Babelon
The worst trail in the world?

Next we headed towards Windsor Castle. On the way, we walked next to the saltworks that produce much of the country's salt. The journey began shortly after, when we started on a chaotic trail that seemed to last for hours.

I understood that when we would finally get there, the journey would be worth it, when I see the view from the top of the promontory. But in the meantime, I'm still climbing... It took about two hours to get up to the fort, the slope is steep and the sun beats down mercilessly. Fortunately, the more you climb the more the wind lowers the temperature. Plan on taking some water, because we were thirsty by the time we reached the top!

An amazing view of the region

On the way, I saw a great number of species endemic to the region, including the Pachypodium windsorii, which are named for the place, many euphorbias, and of course the baobabs I was looking for. Arriving at the top, the panorama is breathtaking. There’s a 360° view of the landscape from the fort, and it offers incredible views of the region. To the north, a desert setting stretches before you, leading to Cap d'Ambre, the island's northernmost point, which is only accessible in the dry season. To the south, the sight goes on forever in the direction of the saltworks. On your left, the Bay of Diego Suarez, and on your right, the Mozambique Channel... At the bottom of the fort, you can see Courrier Bay and its beautiful beach, where bungalows invite you to spend a few days at the edge of the world for a relaxing holiday...