Varaždin, a town of 50,000 inhabitants located 30 kilometres north of Zagreb, served as Croatia's capital for a few years during the 18th century. Around ten kilometres south of the town lies Varaždinske Toplice, to which the Romans were attracted from the 1st century AD onwards due to the presence of sulphur-rich natural springs in the area.

Taking the waters at Varaždinske Toplice

The Zagorje region attracts spa treatment enthusiasts in large numbers. There are actually several spa resorts located in the area's hills, at the towns of Krapinske Toplice, Stubicke Toplice and Tuheljske Toplice. The various pools at these spas are fed by natural hot springs, offering a delightful experience for visitors.

There are also baths and water therapy treatments to enjoy at Varazdinske Toplice too. Additionally, the town also contains the ruins of a spa built by the Romans in the first century AD, and which was still in use up until the 4th century. The town was then known as Aquae Iasae. The rectangular pool built at the time, which is fed by water at 58 °C, still steams to this day. It now has tarpaulin awnings over it in places. If you visit the neighbouring town, you will see a statue of Minerva Medici, the patron goddess of the site.

A fortress conscious of its appearance

After visiting the spas, you will be in fine shape to visit Varaždin and its ancient centre, Starigrad, which lies surrounded by high, limewashed walls. The fortress was constructed at the beginning of the 14th century to protect the town from the threat of Ottoman invasion and has been regularly maintained over the years, resulting in the perfect condition in which is to be found today. Some of its architectural features are typical of the Renaissance period. Additionally, it houses a wonderful museum, which I found fascinating to look around. 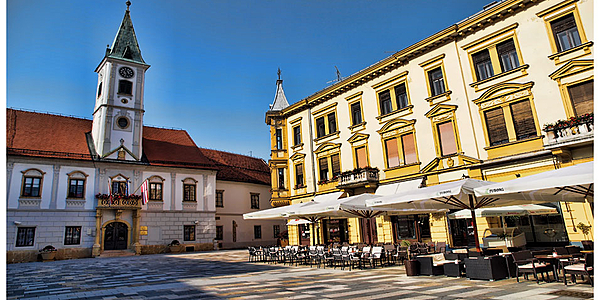 After that, I fully recommend continuing your exploration of Varaždin with a stroll around its streets and squares; it is a very pretty town simply brimming with churches and baroque style buildings. It is easy to see why it was chosen as Croatia's capital in 1767. That honour didn't last long however: a fire in 1776 resulted in Zagreb becoming the capital from that point forward. Though well deserving of its inscription as UNESCO World Heritage, Varaždin has since remained relatively obscure and little known.