On the Brijuni Islands, in the company of Tito!

In 1983, the Brijuni Islands (also known as the Brionian Islands) were designated a National Park of Yugoslavia (prior to the proclamation of the Republic of Croatia in 1990). The archipelago, of which only the two main islands can be visited, offers magnificent scenery and is home to a rich variety of plants, which have been admirably preserved. You can actually tour the whole island on foot or by bicycle.

The crossing from Fažana to Veliki Brijun only takes around a quarter of an hour. Once on the island, you will be able to observe for yourself the extent to which tourism is developing here, especially where facilities for affluent tourists are concerned: there are four classically styled hotels and three villas on the island's west coast (for those wanting to spend a few nights on the archipelago) and a golf course occupies its northern part. There is also a museum housed inside a 16th century fort and a small tourist train that takes tourists on a guided tour.

Though the tour enables you to learn more about the history of the archipelago – which is utterly fascinating – you may find it more enjoyable exploring the island in a more relaxed manner, at your own pace. The ideal way to do this is by hiking around or touring the island by bicycle. This will give you the chance to discover and explore both the ruins of a Roman villa dating from the 1st century BC and, in particular, the traces of a more recent history: that of the latter half of the 20th century, the era of Tito and Yugoslavia.

The Brijuni archipelago – or its main island at least has been inhabited for more than 2,000 years. The Roman columns that can still be seen today around 30 minutes walk south from your arrival point on the island stand as a magnificent testament to that era. The Church of St Germanus, which today contains reproductions of medieval Istrian frescos, and the 16th century fort evidence the medieval and Renaissance civilisations that once flourished in the Adriatic. In those days, the Brijuni Islands served as a popular place to stop for those sailing the main Mediterranean maritime routes. 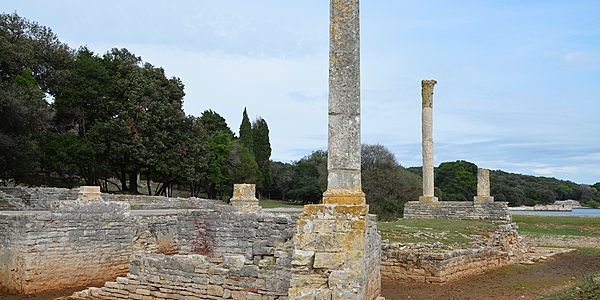 It was for these same reasons that Tito decided to set up home on Brijuni, namely its exceptional scenery and vegetation, the proximity to the mainland, the archipelago's position at the crossroads of the main western and eastern routes, and above all, the insularity it offers, which meant he could be undisturbed when hosting heads of state for talks about the political orientations of the non-aligned states (those which were aligned neither with the politics of the Western Bloc nor those of the Eastern Block at the height of the Cold War). To round off your tour of the Brijuni Islands, be sure to visit the Tito exhibition, which is housed in a building close to the Hotel Karmen! Amongst the things you'll see there are the faces of various world-famous celebrities.