The battle scars of Dubrovnik

During a visit to Dalmatia, it is difficult not to be impressed by the immense reconstruction work carried out to return Dubrovnik, bombed during the "last" war, to its former glory.

After the death of Tito, the conflicts in ex-Yugoslavia affected all the Balkan countries. If the young people of Montenegro and Serbia were to speak to you about the war, if tourism in Bosnia - where the civil war was the most bloody - is mostly centred around remembering the war, in Croatia, they pretend it has been forgotten … and just enjoy the sunshine. Whilst the subject is not taboo, people don't spontaneously talk about the wars in ex-Yugoslavia which killed many civilians and which led to the exodus of a part of the population.

After independence; the Serbian minority in Croatia (12%) and the Yugoslav forces rose up agains the young Croatian Republic. Croatia was attacked by the Yugoslav army and the Serbian and Montenegrin forces who said they wanted to "protect" their minorities but who also wanted to gain access to the sea. You need to visit the towns in Dalmatia such as Dubrovnik, bombed in 1991, to better understand. After the declaration of independence, Dubrovnik was separated from the rest of Croatia by the Neum corridor and its neighbours were still part of Yugoslavia.

The walled city was surrounded for 8 months and partially destroyed. It is difficult to believe today when you walk through the narrow streets of the old town. On a guided tour, you will be told for example that Roland's Column in Luza Square, served as a meeting point for the inhabitants of Dubrovnik during the siege. You will see the shrapnel holes left intact on the walls of the old palace, historical buildings and the ramparts. You will surely have heard of the Serbian poet Milan Milisic who was a victim of the bombings. The ceasefire was signed in 1992. 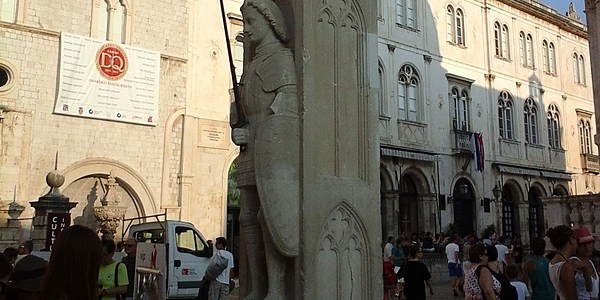 As in Sarajevo, a gallery in Dubrovnik town centre portrays the war in ex-Yugoslavia in a particularly educational way. Named War Photo Limited, this building is dedicated to photojournalism and war photography. On the first floor it holds superb exhibitions of contemporary conflict throughout the year.

On the ground floor, a permanent exhibition has moving photos of the wars in ex-Yugoslavia in the 1990s. Croatia is generally seen as the victim and you soon realise as you travel around the Balkans that each country rewrites history according to the damage it has suffered. Proof that the wounds have not healed …