The most beautiful parks in central Croatia

Use your time in Croatia to explore its numerous national parks. They're all close to the Adriatic!

Plitvice and Krka: a walk amongst waterfalls

With sixteen lakes situated at different levels, Plitvice is THE park to visit in Croatia . Located inland from Zadar , it's worth spending a whole day there and it's a great stopover if you're on the road between Zagreb and Dalmatia. Classified a UNESCO World Heritage Site in 1979, the park has sixteen lakes with waterfalls that tourists can cross via wooden footbridges that blend perfectly into the surroundings.

Best to book in advance during high season if you plan to stay in a hotel or at a campsite. You can get around Plitvice Lakes National Park on a small train and cruise the lakes on electric boats. From a geological point of view, its unusual formation is due to sedimentary deposits being mixed with mosses and algae that have gradually formed layers to create an incredible landscape... It's called a karst hydrography. Weird, eh? I suggest you tour both the upper and lower parts of the park.

If, during your trip Croatia, you find yourself on the Dalmatian coast, bear in mind you won't have far to go if you want to see this stunning park. Krka is a smaller version of Plitvice and boasts a similar, if slightly less spectacular, landscape. Don't just splash around at the foot of the waterfalls - climb the steps behind them and hike around their midst for a couple of hours. A must! You can easily do a return trip from Split in a day. There's no need to visit both parks. 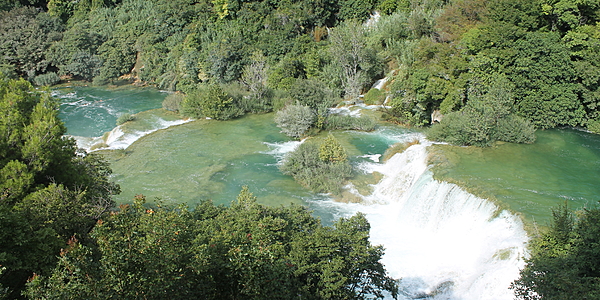 After these two Croatian geological wonders , the other parks have more typical mountain landscapes. Staying inland from Zadar, the Paklenica National Park , on Mount Velebit, is a rock climber's paradise. Anica Kuk peak is a favourite and canyons at Velika and Mala Paklenica are impressive to say the least. Plus there are rivers, caves as well as plenty of animals and plant life! The Risnjak Park, close to the Slovenian border, is in a mountainous region and home to wolves, lynx and bears - all at less than an hour from the coast. The scenery is very similar to other European mountain parks.

The coastal parks are designed to protect the fragile marine eco-system. Cars aren't allowed on the Brijuni Islands, which are accessible from Pula. Mljet National Park is on the wildest island in Dalmatia, beside two bays that look like lakes but are in fact linked to the sea.

So you'll be spoiled for choice when it comes to the great outdoors in Croatia. The parks are located near to the sea, so you can switch between sunning yourself on a beach and heading out to the islands.