Halong Bay, between sea and land

A busy tourist area in Vietnam, Halong Bay attracts thousands and thousands of visitors every year from the whole world. If the majority of them are happy to explore the famous sea part, it is also very interesting to go to discover the inland part which is a little less well-known but just as amazing. 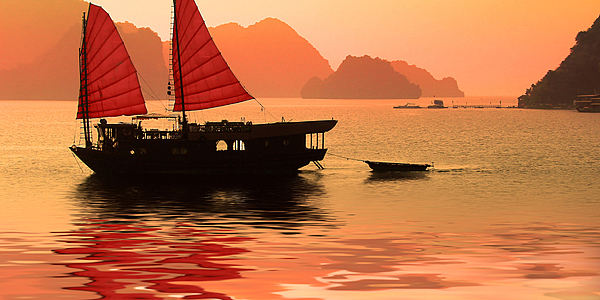 The classic cruise during your trip to Vietnam starts with a succulent meal. During the time you eat, you will navigate towards Dau Gô island. The atmosphere is magical, worthy of a pirate film. You will then prepare to board the island which will show you its treasures, including the Cave of Wonders. The inside is awe-inspiring and magnificent. The caverns are immense. Stalactites and stalagmites form giant natural displays. Then you set off again.

From afar, you'll see Chicken Rock. As the name suggests, these two sugarloaf rocks have the shape of chickens and are the symbol of the whole of Halong Bay.

You'll continue until reaching a floating village of fishermen. There's a school, a small dispensary, and small businesses. From there, you'll take a boat to visit Tunnel Cave. This is actually a passage under the rock which leads to an interior lake. It's also called 'the fairy bath' because, according to legend, this lake appeared one night when four fairies wanted to bathe. They had good taste, it must be the most beautiful bathing spot in the world.

At the end of the day, you'll anchor down for the night in a cove on Cat Ba island. 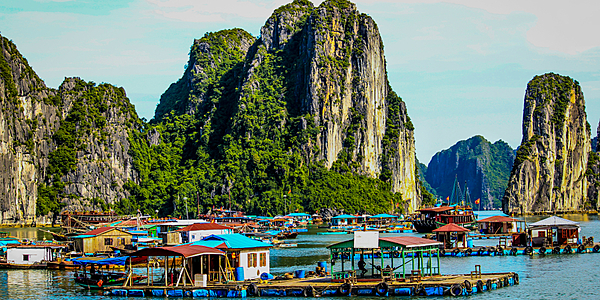 Halong Bay offers a different landscape to that of the classic post cards of Tam Côc. The inhabitants of the village offer journeys along the river. The oarswomen row in a traditional way, with their feet. It doesn't look very practical, but they get along very well. For two hours, your boat glides silently amongst paddy fields, mountains and sugarloaf rocks. You will even pass under the mountain three times . The ceiling is so low that you have to put your head down. The trip is fantastic and you are in a marvellous natural environment. How can nature create such landscapes?

You can also rent a bike to discover the inland Halong Bay region. The scenery is magnificent and incredible. There are paddy fields as far as the eye can see. Rocky peaks and sugarloaf mountains emphasise the area. You'll lose yourself in the pleasure of little paths and discover a thousand scenes of life. A farmer guarding his goats shows you which way to go. You will go from meeting one person to another. Villagers are emptying an ox suspended by its hooves. It's disgusting. In a little lake, a woman is fishing helped by a fish-trap and brings up a little snake. Further on, two men fish with electricity. Helped by a pole connected to an electric battery, they send a shock into the water. This knocks the fish unconscious, disorients them, then they can be plucked out of the water. In the middle of a paddy field, a child is being carried on the back of a buffalo. It's an amazing day. 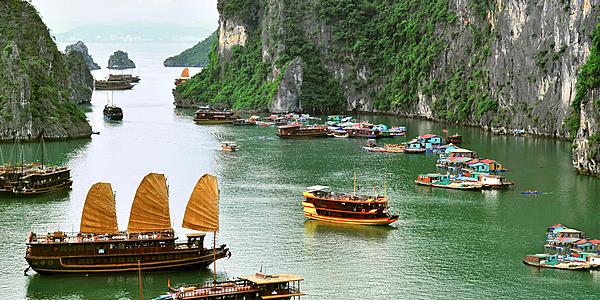 ©
Shutterstock
On the Mekong from Can Tho