A walk to Namo Buddha, a sacred stupa 40 km from Kathmandu

After the powerful earthquakes which struck Nepal in April and May of 2015, the country is slowly getting back on its feet. This article was written before the catastrophe.

Situated in the Kathmandu valley, Dhulikhel is the starting point for a trip to Namo Buddha. A few hundred steps later and you'll have reached a statue of Buddha. Continuing the climb, you'll find a small temple dedicated to Shiva, where there is also an entrenched encampment belonging to the Nepalese army.

From Shiva to Buddha

This walk plunges you straight into the heart of the Nepalese countryside and gives an insight into the lifestyle of those who live there. You'll be able to watch a woman making clothes on a sewing machine set up outside! You'll likely see children taking part in lessons, or chanting in unison. Below the women and children, goats and chickens roam freely. Dwellings give way to paddy fields, and the land opens up before you: you can see all the way to the Himalayas, an arresting sight on a clear day. After letting your eyes adjust, you'll be able to make out the hill of Namo Buddha. Before reaching it, you'll arrive at a little place overlooked by a stupa. It's an ideal stop for refreshment, while watching others around go about their daily lives. The monks, children and animals all bustling about their business make a striking picture.

A short but steep ascent later, you'll reach Namo Buddha. The scenery is spectacular. Namo Buddha is a magnificent stupa situated at the top of the hill and surrounded by hundreds of prayer flags, which release their religious requests as the breeze ruffles through them. Each colour in a flag represents an element: fire, water, earth and sky.

The legend of Namo Buddha

This stupa is dedicated to Buddha, who was at the time a young prince passing through the region. As the legend has it, Buddha met a tigress here who was so weak she was incapable of feeding her young. Seized with pity, the prince sacrificed himself to the tigress, who immediately devoured him. This act of compassion allowed him to attain to a superior level of existence, thus how he became Buddha.

Spend some time there soaking up the spirituality of the place, as well as taking in the magnificent views. The sight of the prayer flags swaying in the breeze with the Himalayas as a backdrop is incredible. 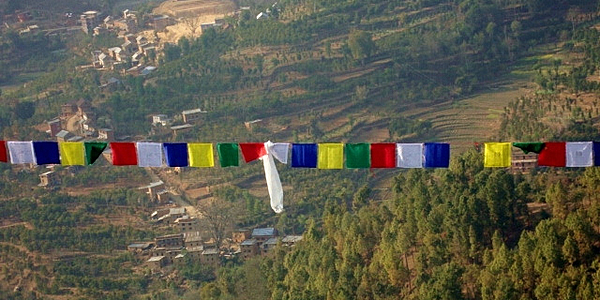 Sleeping at the monastery

Just next to the stupa there is a Tibetan monastery, with an ocre facade richly decorated with frescos and gilded sacred elements. If you have the inclination, you can ask a monk to show you around the monastery and, if you're bold enough, to let you spend the night there. It's a truly spiritual experience. Don't forget to explore the monastery in a clockwise direction, turning the prayer wheels to free the sacred sayings.

The next morning, continue on to Panauti, a small medieval village filled with marvellous Buddhist and Hindu temples.