Are the Gokyo Lakes the most beautiful trek in the Himalayas?

After the powerful earth quakes which struck Nepal in April and May 2015, the country is rebuilding itself little by little. This article was written before the catastrophe.

The trip leaves from Lukla, a town than can only be reached by plane. Arriving at the airport will give you your first thrill of the trip, because the runway is squeezed between the mountain on one side and a void on the other.

From Namche Bazar to Gokyo

After Namche Bazar you have to go left to get to the Gokyo Lakes. The crowds disappear immediately and you are alone in the vastness. No more processions of trekkers, walking single file up to Everest's base camp.

After a hard climb to Mongla, you will be rewarded with a 360° panorama of the surrounding summits. The majestic Ama Dablam dominates the countryside, and seems so close you could almost touch it. Don't forget to look up and you will probably see eagles gliding on the warm air currents. The descent to Phortse Tenga, nestling next to Dudh Kosi and its temptestuous waters, is easy.

The trek continues through forests of giant rhododendrons, centuries old trees and moss, making it feel a bit like something out of Lord of the Rings, fairy like, almost unreal, and likely to lead to meetings with wild life. Then the adventure goes on through Alpine fields and past yaks, until you reach the Ngozumpa moraine, which is 17 kilometres long. The marvellous view from Ama Dablam's narrow peak gives way to something more imposing, the enormous wall of Cho Oyu, more than 8,000 metres high, which separates Nepal from Tibet.

After passing the first and then the second lakes you finally arrive at Gokyo, a small village situated at the foot of the third lake.

Depending on when you arrive, and how you feel, you can set off again in the afternoon to see the sun set over the mountains from Gokyo Ri, a rocky promontory that has a wonderful panorama over the Himalayas.

The final climb to Gokyo Ri

The climb is steep, the altitude makes itself felt with every step, it becomes harder with every step you take, panting for breath, among the rocks. Front and centre are the chorten and wind battered prayer flags that announce your arrival; on the right is Cho Oyu, behind Cholatse, and then...you can see Everest, imposing, powerful and majestic. The little pyramid that we saw from Namche Bazar was now very powerful and made us feel we were in its territory. 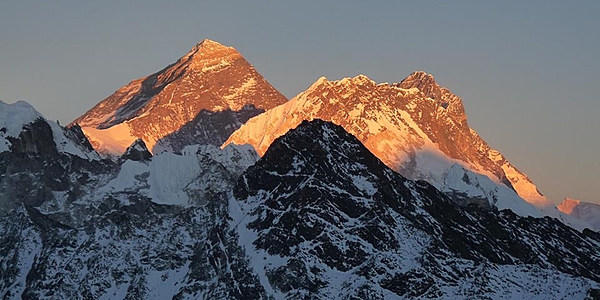 The sun began to go down, colouring the mountains rose and violet, gradually swallowing the day until the blue of the night covered it. Only a few more metres, we had been climbing for about two hours but it felt more like a thousand years. Finally, we arrived at the view. And what a view! Definitely the most beautiful in the region. Yes, the mountains aren't as close as they are from Kala Patthar, the viewpoint above the Everest base camp, but the panorama from Gokyo Ri, and the silence - because we were alone - was unforgettable. The earth's highest summits are there before you, Makalu, Lhotse, Everest… coloured in flamboyant reds and pinks by the last rays of the sun, before they were swallowed by the night. The descent was just as sublime, the moon highlighting the shadows on the summits and the eternal snow as if they wanted to say to us: "we are still here".