On the African Road

Perhaps you could take this route if you feel like exploring southern Morocco at your own pace, or even if you want to get to Mauritania or Senegal.

Originally, this road was only a trade route that allowed for the movement of precious commodities between Africa and Europe. There were many edible commodities manufactured and produced in Africa, which were brought up to Europe to be resold at 10 times their original price in Western markets. In the opposite direction, the road was also often used by many organisations and NGOs, who brought medicine and basic staples for the impoverished people of Africa.

Today, you'll notice many fruit and vegetable trucks heading from Africa towards northern Morocco or even to Europe. These trucks are used by a large number of travellers now, who pay the driver a little money to ride amongst the tomatoes and cucumbers, from Dakar and Nouakchott to northern Morocco.

This route was the original path of the famous and controversial Paris-Dakar Rally. Therefore it was witness to a parade of many race cars going by at full speed on the sometimes sandy paths between the villages and huts. Today, this race no longer goes through here, because of the incidents that occurred along the way, and the sharp criticism from local residents and organisations who no longer wanted this devastating race on their lands.

It's also the route for other lesser-known races, such as the 4L Trophy student event: French students leave for Africa in 4L Renaults to support humanitarian organisations while taking part in a sporting challenge.

Finally, this route remains legendary because it has been used by numerous artists, writers, and poets from around the world, who have written about, drawn, photographed and filmed its sites and you should check it out before leaving for a trip to Morocco. 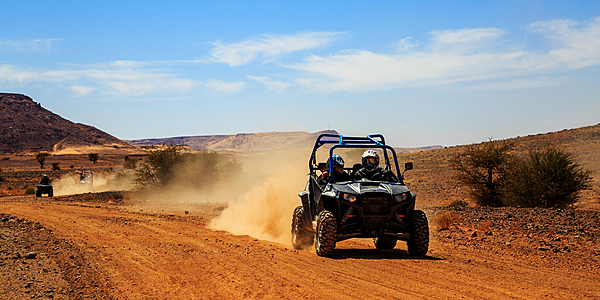 ©
Shutterstock
A road for travellers

For decades, this road has been taken by travellers from around the world who are heading to West Africa in all types of vehicles. Whether they're in cars, trucks, caravans, motorhomes, motorcycles or even bicycles, there are many who have trodden this pavement that is often covered with a thick layer of sand.

Duringa trip to Morocco, it isn’t unusual to see travellers arriving in vehicles on ferries from Spain, to travel to southern Morocco, and then to West Africa. Buyers of old electronic equipment or even drugs certainly show up here.

However, this route is particularly controversial today. First, because it goes through the complicated area known as the Western Sahara, where the issue of status has not yet been resolved in Morocco, and because it passes through areas currently said to be at risk (especially once you get past the Mauritanian border) by the Ministry of Foreign Affairs.

Therefore, it is recommended that you find out the road conditions ahead of time as well as the current risks before heading out on an adventure.