The deserts of Morocco: which one to choose?

A camel trek in the Moroccan desert is an absolute must. How to enjoy an unforgettable camel trek away from the hordes of tourists in shorts.

The pink dunes of Merzouga

There are two main spots where you can discover the Moroccan desert and it is difficult to recommend one over the other as they are both different. The desert at Merzouga, known for its pink dunes at dawn, is easily accessible from the Dades Gorge or the Todra Gorge, two magnificent and iconic sites of rural Morocco.

Merzouga amounts to a row of hotels; tourists can embark on a camel ride in the Erg Chebbi, and those who have no guide should expect to be harassed. Do the opposite and play the competition! In Morocco, the prices reduce gradually. Riding a camel, however, is not very good for the posterior, so I would warn against signing up for a camel trek that lasts several days. Without going too far, you will soon feel like you are in the middle of nowhere, especially during low season. In autumn, for example, it is likely that you will be trudging through the dunes all alone.

Generally, after a 2-hour camel trek, you will get to stop at an encampment and eat a tajine with your guide. Accommodation is basic, on animal hides with thick blankets. I'd thoroughly recommend waking up early to watch the sunrise. You will be back at base camp by 11 o'clock. Most hotels will leave you to relax if you are eating lunch while waiting for your bus. 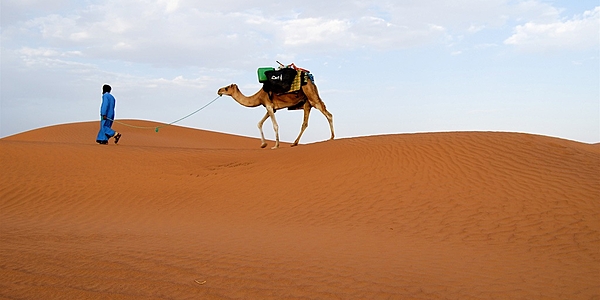 Erg Chegaga can be found at the end of the Draa Valley, a region of lush oases and Berber villages little frequented by tourists who often stop at Ouarzazate or carry on to Marrakech. The journey is not particularly smooth to M'Hamid, the departure town for treks in the Erg Chegaga.

Along the way, it is an absolute 'must' to spend a night in Zagora, the town that probably made the biggest impression on me during my stay in Morocco. You really feel you are part of the tale of the Arabian Nights. In the sweltering heat, you can climb Jebel Zagora, a kind of small, barren mountain which overlooks the Berber town. On the way back, lose yourself in the Palm groves, walking through the lanes like the locals.

It's difficult to choose between Merzouga and the Draa Valley, so I suggest you visit both rather than spending time in Casablanca or Rabat, cities which offer little difference in regard to the magic of the South of the country.