If you decide to visit the Red Centre region during your trip to Australia, you will certainly visit Ayers Rock, the most visited site in the region.

Approximately 400 kilometres from Alice Springs, Ayers Rock, also called Uluru, is a main destination for tourism in Australia. Getting there from Alice Springs takes less than one hour by plane and approximately 5 hours by bus or with your own vehicle. A desert crossing is a unique experience, so don't hesitate a second. On the other hand if you go there directly from the major cities of the coast like Sydney, Brisbane, Melbourne, Canberra, Adelaide, Perth or Darwin, the plane is necessary.

Unless you are a true lover of the road and have plenty of time ahead of you, the plane remains the ideal solution. To get there by car, take Highway 87 which crosses the country from north to south and turn down Highway 4. You will think that you can see Ayers Rock on your left. Don't be fooled - it is Mount Connor. You are not there yet, so continue your journey (a good thirty kilometres further) to Yulara. You have arrived. 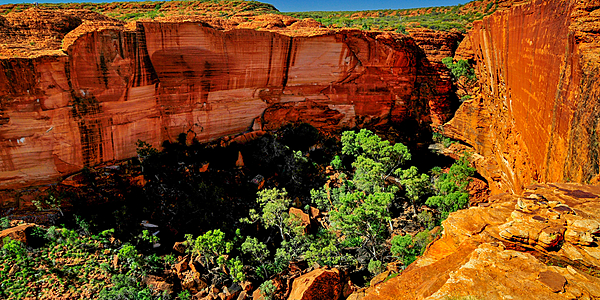 600 million years old, 348 metres high and with a circumference of 9 kilometres, it was discovered in 1872 by the explorer Ernest Giles. This is the most sacred site for the aboriginal people, who see it as nothing less than the navel of the world.

A whole series of walks are possible. From the shortest of barely 1 kilometre to the longest of 9.4 kilometres. Prefer the latter. It is entirely flat and allows you to admire the rock from all angles, since the circuit takes you right around the rock. It is the most popular walk at Ayers Rock. Remember to take enough water as the temperatures are stifling. Also respect the signs which prohibit you from photographing certain sacred sectors. Don't take this lightly - the rangers are watching you.

Another extremely popular activity is to climb Ayers Rock. Without going further into the debate, it is simply recommended not to do it as a simple matter of respect. The Aboriginal people themselves have never climbed it and take a very negative view of the tourists who do so. Be respectful of this site, which they revere more than any other.

The times of the day not to miss are sunrise and sunset, when the sunlight bathes Ayers Rock in colours ranging from orange to purple.