For most Tibetans, because of the Chinese invasion, Ladakh is more like the true Tibet than Tibet itself. I adore this unique region, which is totally different from the rest of India.

The road to Leh

Leh is the capital of Ladakh, 3,500 meters up in the Himalayan mountains. There are two ways to get to Leh: the simplest, and the one that is available all year round, is by plane, the longest is by road, but it's only open two or three months of the year in summer.

It's the world's highest road suitable for cars, with a pass at more than 5,300 meters above sea level! Some years the pass doesn't open at all because of the snow and cold. The road is truly breathtaking and really makes you realize how isolated and how special this region is. If you arrive at Leh by air you are surprised as soon as you land, because at this altitude breathing is more difficult and shallower. My piece of advice - forget the cigarettes!

If you go to Ladakh during your trip to India you will find a region where the majority is Buddhist. Monasteries, prayer flags, and prayers wheels, traditional Tibetan dress, signs in Tibetan... India seems really far away! 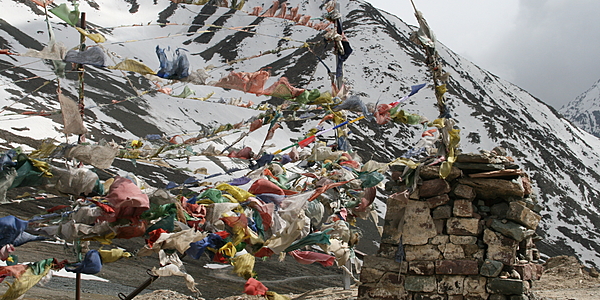 During a trip to India, lots of tourists go to Ladakh to go trekking in the superb mountains there. Nowadays, the main business of its capital, Leh, is tourism and excursions in the surrounding area.

The most famous treks are: the ascent of Stok Kangri, which is more than 6,000 meters high and is very difficult, or the amazing walk along the river Zanskar, which is frozen in winter, to get to neighboring Zanskar. Lots of treks are organized for walkers to discover the region's monasteries, a good way to marry culture, sport, and nature.

Nowadays, more and more travelers come to explore Ladakh in ATVs or mountain bikes. Be careful of sunburn, which can be severe in this region and at this altitude, don't forget to cover your head and drink plenty.

Monasteries perched on the mountain sides

One of Ladakh's treasures is its numerous magnificent monasteries perched on the mountain sides. The main ones are Spotuk, Thiksey, Hemis and Lamayuru.

During your visit to one of these monasteries you can take part in the prayers, processions, music, and the monks' chants, which, incidentally, are on UNESCO's List of Intangible Cultural Heritage.

©
Nina Montagné
In the heart of Rajasthan's desert.
More articles